The Bandit Camp, a forgotten temple.

Our heroes leave town with a plan to sneak into, and eliminate a bandit camp.

Along the way they engage a rather Large boar in combat. Nisl disapproves but aid them all the same. After killing the boar they cart it along with them, tied to the top of the wagon.

Nisl disguises himself as a bandit and drives the wagon into camp, drawing out all the bandits. The heroes launch a deadly surprise attack using a whirlwind of objects to hold off the horde of bandits. Silf dances with the wild slicing through for after foe whilst Boden and Savos smash in the skulls of the attack dog like orcs.

Inside the silver mine they find a mysterious fountain which proves to have amazing restorative powers and a giant caged beast.

They immediately engage two foes hidden behind a makeshift divider, entangling them and igniting them, but from the lump of cloth wrapped burning bodies emerges a huge deformed giant like beast. Covered in lump, and blister the beast oozes a pus like substance from it’s skin.

A mighty battle ensues, with severe damage done to it mind by the mighty Proxy. Boden proves an excellent distraction before his dreaded narcolepsy comes into play, allowing the beast to land a mighty blow. With Boden unconcious things look grim. Our heroes draw the beast into a smaller corridor where the beasts size proves to be it’s downfall, it’s effectiveness greatly hampered by the confines of the passage. Morgus lands blow after deadly blow in the creatures exposed flank, whilst Savos’ turtle proves to be a stalwart defender against the creatures mighty strikes. Eventually it falls.

On the way out the heroes free the trapped Ogre and take with them 2 captive orcs.

A stream on their route back had risen significantly over the course of the day leading to some difficulty in crossing, particularly since the flood waters bought with them some rather nasty eels. Luckily Savos steps in and befriends them before they become a threat, but not before Nisl shows off his remarkable physical prowess by jumping the 15 foot wide stream.

They awaken one of the orcs with intentions of interrogation but are surprised when upon waking he immediately thanks them. As the orc explains he and his brethren were under the influence of some kind of mind control, the goddess pan had forced them to guard the mine. The heroes let him, and his one surviving companion free, having made some lifelong allies.

Nisl awakens late in the night to the sound of footsteps outside his door. An assassin enters but Proxy swiftly deals with the intruder. The heroes search and loot the body, finding a kill order from the Thelopian assassins guild and a strange coin. They strip the man and leave his body to rot in a nearby alley.

After a rest, examining the work done to their temple, and recruit a guard to guard said temple they head off in search of that which has been preventing traders from returning.

Along the way they notice they are being tailed by a pack of opportunistic dogs. Savos challenges their leader for dominance and succeeds . The pack continue to follow them and provide them with fresh game.

Then they find the plains. Shattered rock, mighty chasms and a distinct lack of life for miles. The smell of sulfur in strong in the air carried on a cold breeze from the center of the plains.

Hero point for reading, plus an additional for personalized journals of these events.

The sounds of screams echo up the prison tower prompting Jole to release our heroes.

A brief fight with a ranger and his pet weasels ensue.

A god(Neus) appears before them and grants them gifts after they prove themselves in combat.

One of the gifts is an old run down abandoned temple, containing a seal. At this stage they decide Jole is to be their slave and instruct him to begin cleaning.

The heroes waste no time commissioning it to be done up to it’s former glory.

On the way to the market they talk down some desperate thieves. Letting them live to thieve and kill another day. Perhaps on some less capable people.

In the Market they meet Garess. A successful merchant, along with getting him to pay they get they extort money out of the other local merchant families.

They capture and torture some bandits before handing them over to be crucified as an example.

They left their mildly injured horse for dead on the road outside the city and force ((Jimmy)) to drag the cart back to town.

1 hero point to anyone that reads this, and an extra for anyone that provides me with a good personal “Journal” type entry on the events.

And so it was through a variety of means our heroes ended up in the Merton Prison tower. 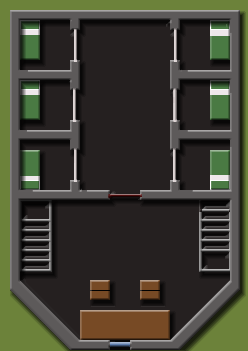 A few days pass rather uneventfully, to pass the time the heroes share stories of their pasts, and boast of their skills, anything to amuses themselves. The only break in each days monotony is delivery of the daily meal by a rather plumb guard Jole.

Jole, a rather portly man with a bushy mustache treats the prisons all fairly during their stay, although at times he is quick anger when insulted. He often speaks of a rather illustrious career in the Mertonese army, and never of any family or what caused him end up guarding the scum of society.

On this particular day Jole brings news. You all are to die. The execution shall be held 2 weeks from this day.

Welcome to your campaign!

A blog for your campaign

Wondering how to get started? Here are a few tips:

Invite them with either their email address or their Obsidian Portal username.

Make a few changes to the home page and give people an idea of what your campaign is about. That will let people know you’re serious and not just playing with the system.

If you want to set a specific mood for your campaign, we have several backgrounds to choose from. Accentuate it by creating a top banner image.

Characters form the core of every campaign, so take a few minutes to list out the major NPCs in your campaign.

A quick tip: The “+” icon in the top right of every section is how to add a new item, whether it’s a new character or adventure log post, or anything else.

The adventure log is where you list the sessions and adventures your party has been on, but for now, we suggest doing a very light “story so far” post. Just give a brief overview of what the party has done up to this point. After each future session, create a new post detailing that night’s adventures.

One final tip: Don’t stress about making your Obsidian Portal campaign look perfect. Instead, just make it work for you and your group. If everyone is having fun, then you’re using Obsidian Portal exactly as it was designed, even if your adventure log isn’t always up to date or your characters don’t all have portrait pictures.

That’s it! The rest is up to your and your players.

I'm sorry, but we no longer support this web browser. Please upgrade your browser or install Chrome or Firefox to enjoy the full functionality of this site.